This race bills itself as a good introduction to ultra running and even goes as far as to call the course runnable.  The implication being that this is an easy course.  While I would definitely recommend this as someone’s first ultra, nothing about running 50K on this or any other course is easy.  And there are probably only a couple of the 300+ participants that run the whole thing.  I’ve run this race twice now and each time my watch measured the elevation gain right about 3900 feet or 125 feet per mile.  It’s a wonderful single loop course and virtually impossible to get lost on considering how well marked it is.

This is a well established race with amazing volunteer support that has all the logistics nailed down tight.  If you get there early enough (say an hour early), you get parking literally feet from the start/finish.

In even years, the first couple miles clockwise are wide open with lots or roads and double track trails which let the runners space out a bit before hitting the narrower trails.  This worked to my benefit as I messed up getting to my normal starting position (smack dab in the middle of the pack).  After about a hundred yards, you hit a short road section and I was slightly concerned when my legs felt sluggish.  I didn’t have any grand plans of lighting up the course, however it’s never a good thing when doubt enters your mind before you’re even out of sight of your car.

So I did what you’re supposed to do in this situation – I dialed back the effort from low to completely chill.  This meant walking all the slight hills, while everyone else kept running.  Luckily, my legs loosened up before the first mile was even out.  I would get to a downhill section and was flying past other runners left and right.  Part of me was aghast that I was going so fast so early in the race, but I was fluid and the effort felt very low so I went with the flow. 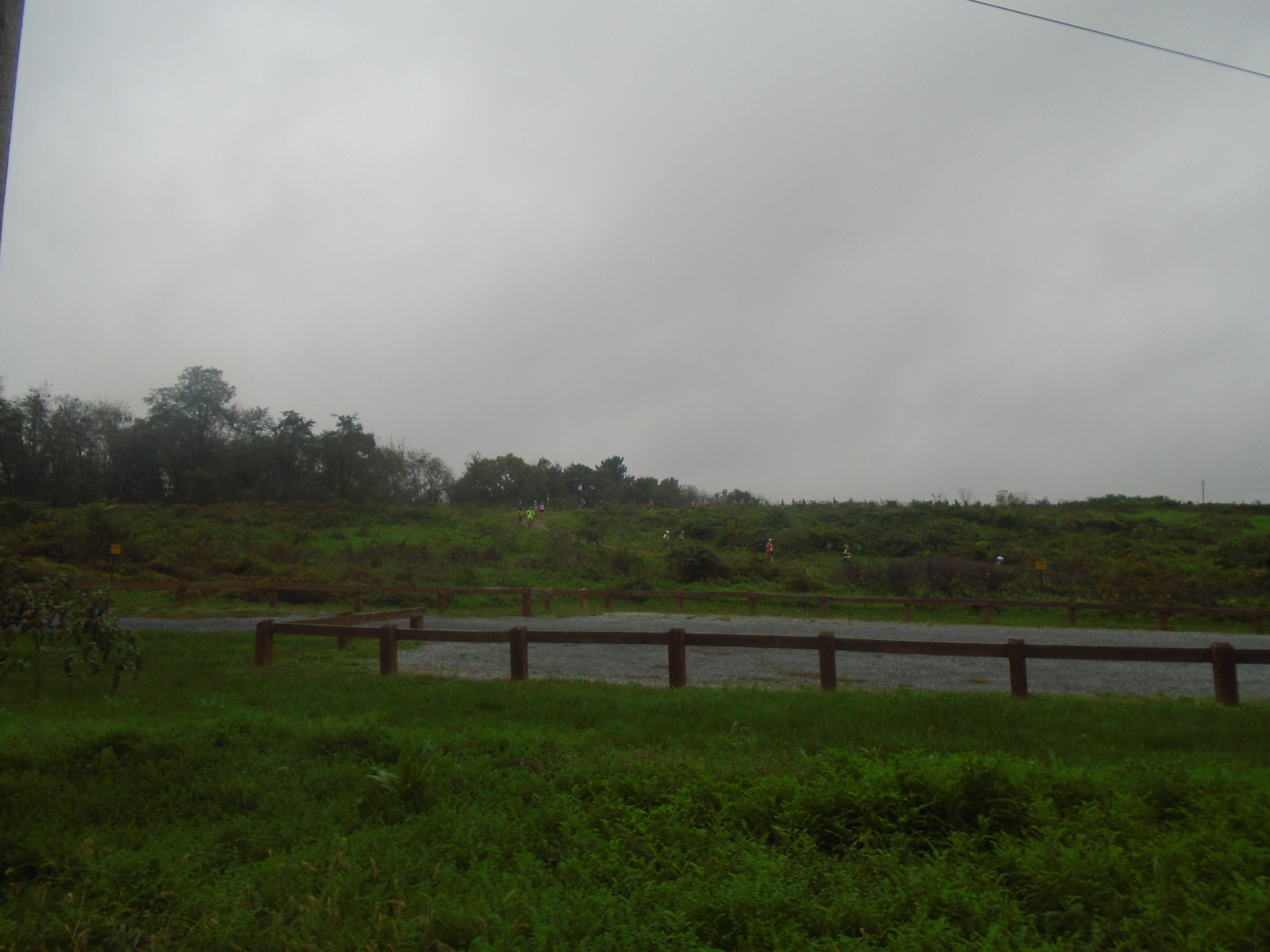 Looking back on the course a little further on.  It was overcast until about noon, however that didn’t make it comfortable running.  Seventy and humid right from the gun.  Even though the aid stations are fairly close together, I still carried two 20oz bottles with me the entire race.  One was filled with water and the other Mountain Dew.  While this was a little overkill, I like to have the option of switching up what I’m drinking whenever I want.  One bottle is a must for this race as while the aid stations may be only 3-4 miles apart, this can translate into an hour towards the end of the race when you slow down.

I was in a really nice groove through the first half of the race.  I was maintaining my position on the flat and uphill sections and steadily passing people on the downhills.  It wasn’t until about mile 13 that my legs started feeling tired, however I was still able to maintain a pace +/- 11 minutes per mile. 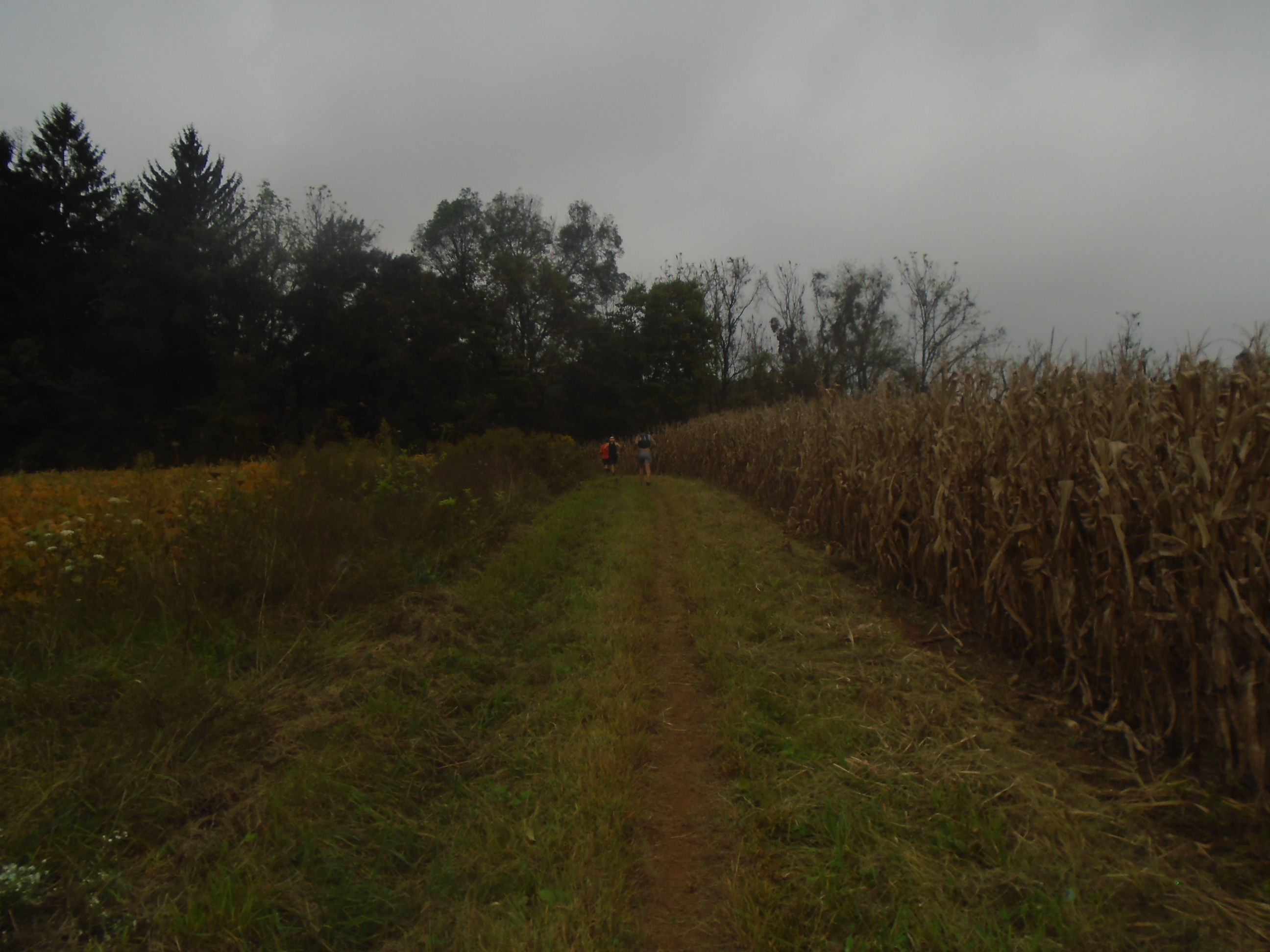 While there was a decent amount of running through open meadows, most of the course is well shaded.I’ve included a lot more pictures than normal to give an idea of the beauty of the race.  Unfortunately, my photography skills can’t fully do the course justice.

Coming into the second aid station.  This lady had a huge cardboard fist that I must have punched a half dozen times as I saw her at most of the aid stations throughout the day.  The aid stations are stocked with a wide variety of food, however I passed on most of it.  I went with a gel every three miles for most of the race and a couple gummy bears here and there.  My diet during ultras have been a constant evolution over the past four years and I have no doubt this will continue being the case.  Honestly, I don’t think it matters what you eat as long as you can get a steady stream of calories into your body.

The weather started out warm (70 degrees) and humid despite the overcast conditions.  It stayed semi-comfortable until the sun broke through and the temperatures climbed up into the 80s.  It felt more like August than October.  Lucky for me I’ve spent a lot of time this year running in these types of conditions. 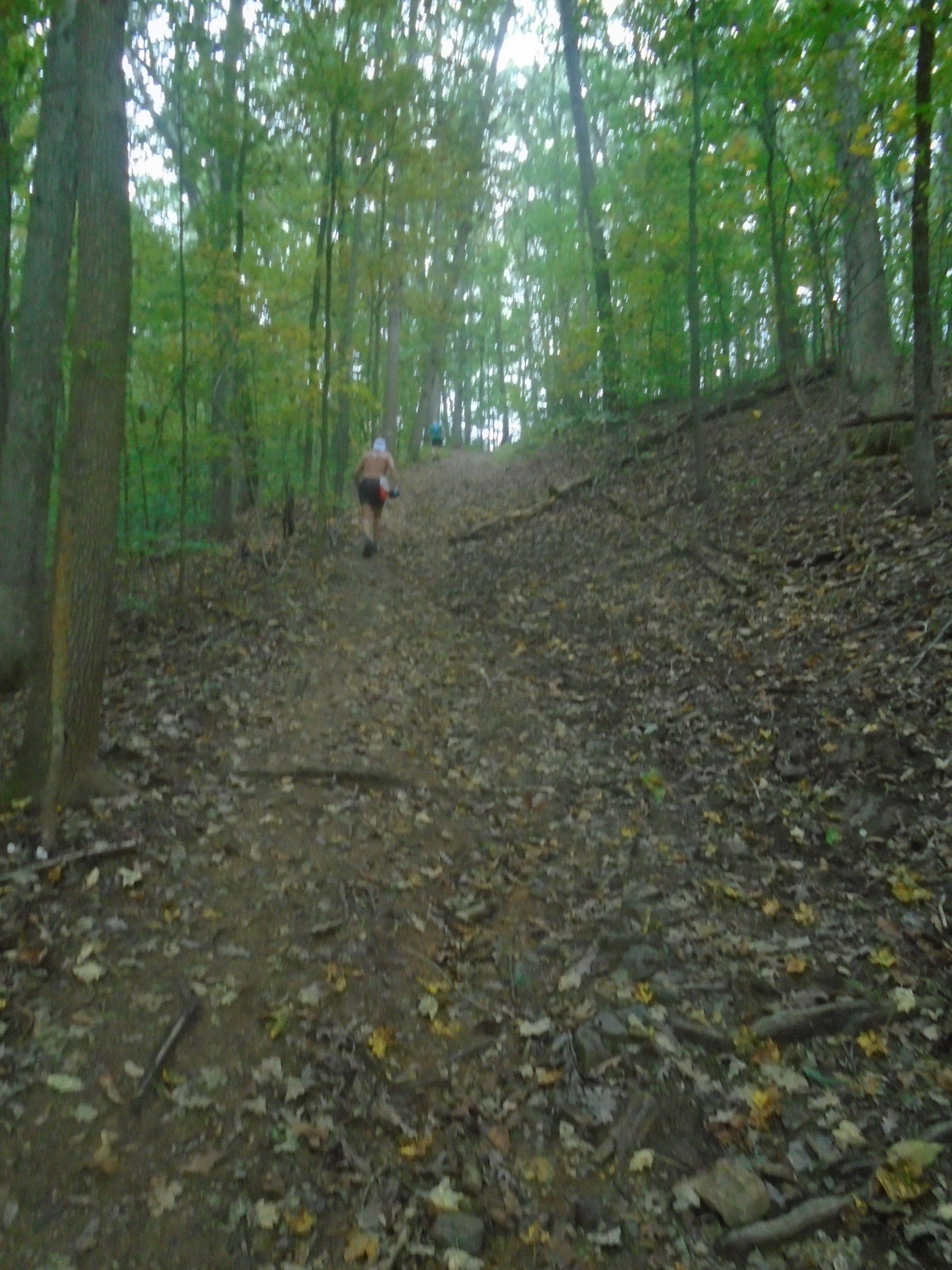 Steep (but short) hill right before the third aid station.  Note: the picture is blurry because I was moving so fast. 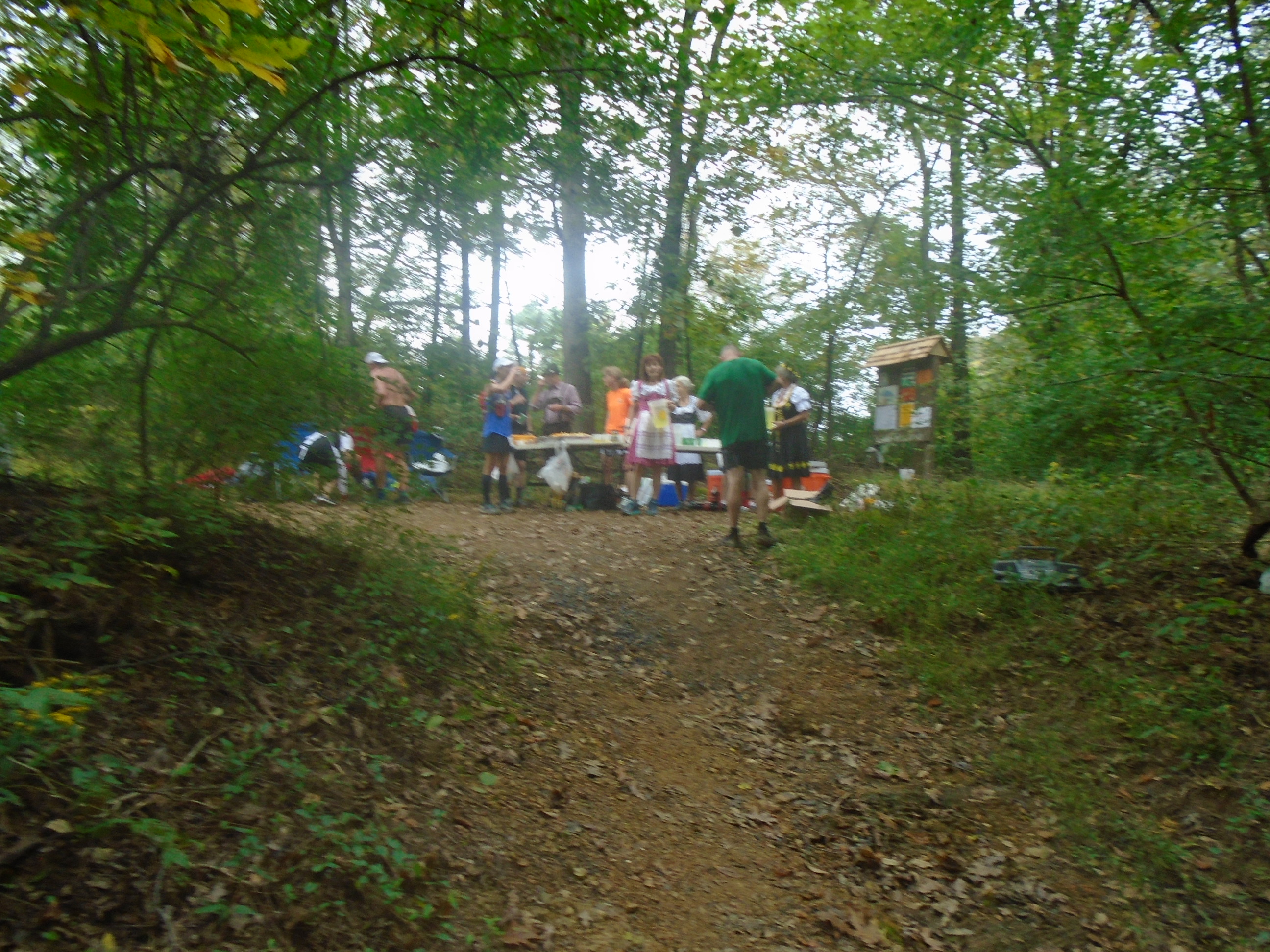 If Stephan Weiss is involved with the race, then you’ll always find at least one German themed aid station. 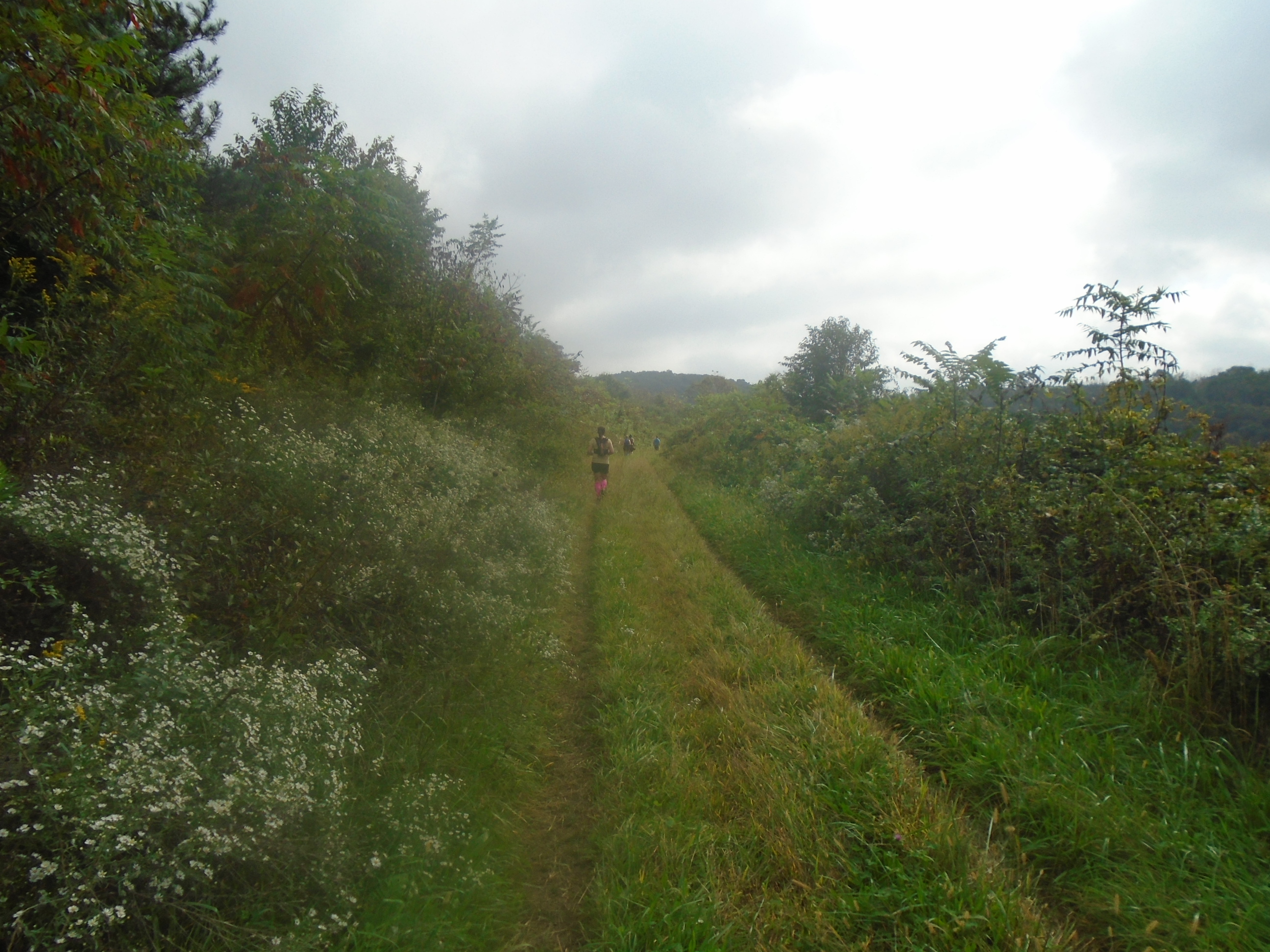 Some more smooth double track trails. Uh-oh. Is that the sun starting to come out?

Just past this aid station, I start up the trail and all of a sudden things started looking familiar.  The Naked Bavarian race shares the last 13 miles with this course and I’ve run it enough the past couple years to know the trails very well at this point.  While this is normally a good thing, I could have used some amnesia about the next 3 miles.  This is far and away the hardest part of the course with the two largest hills.  The first is completely open and the sun just baked us as we climbed up it.  The second isn’t quite as steep, but quite a bit longer.  The combination of the two took the last pep out of my step.

And with my pep gone, I stopped passing other runners.  I would swap places with a couple other runners for the last 10 miles and be passed by a few others who were able to pace themselves a bit better than me.  I would like to play the “undertrained” card here, but I was running a lot stronger than I thought I would so don’t think that was the case.

I joked about this not being a runnable course earlier, but miles 21-27 are completely flat.  I was able to run most of this, but there were definitely some inclines that I convinced myself where “hills” so I could walk. 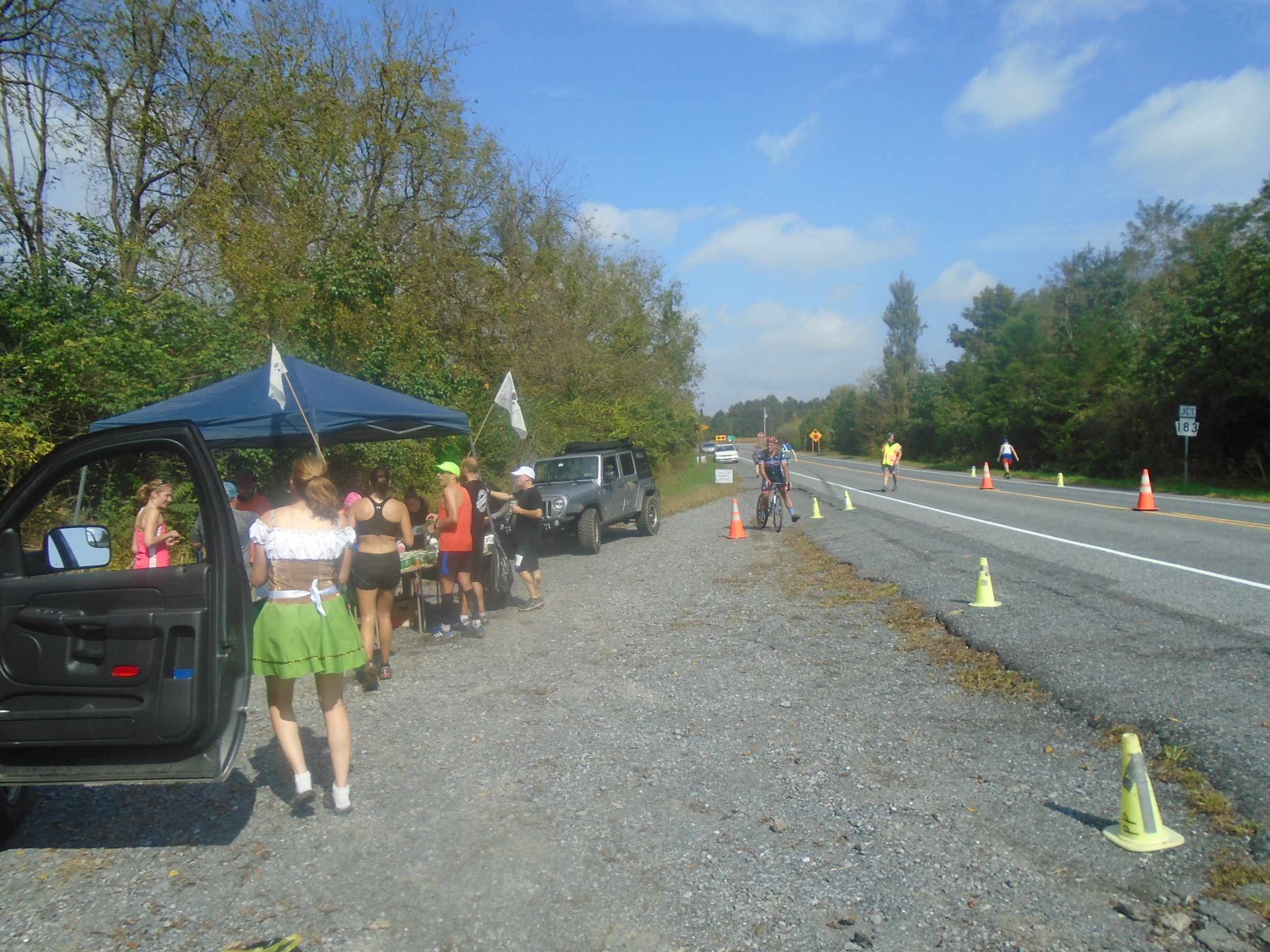 Next to last aid station. Either this one or the last had bacon. Shame I wasn’t in the mood.

One of my favorite sections of the course. Love the flow through these trees.

You can tell you’re getting towards the last aid station because it starts to get a little hillier. 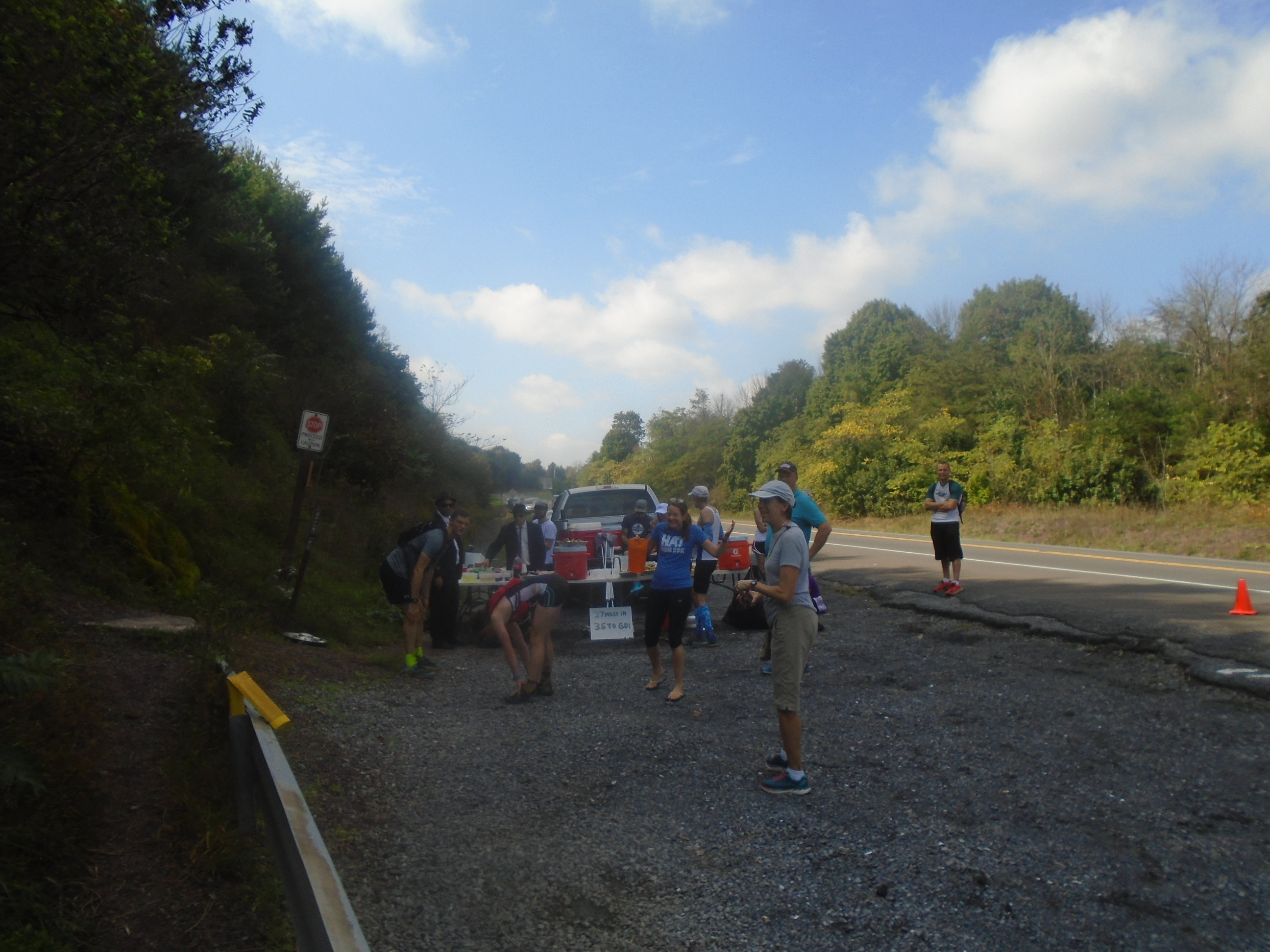 This trail is just past a half mile long stretch of open meadow.  Two miles left to go.

I’ve spent the last three miles looking for this bridge as it leads to. . .

I rolled across the finish line right at 6 hours.  Coming into the race I was thinking 6-6.5 hours was a good guess at a finishing time.  If I’d have known how hot the weather was going to be though I would have added 10-15 minutes to that time.  Overall, it was a wonderful race on a great course.  I’ll definitely be back at some point in the future. 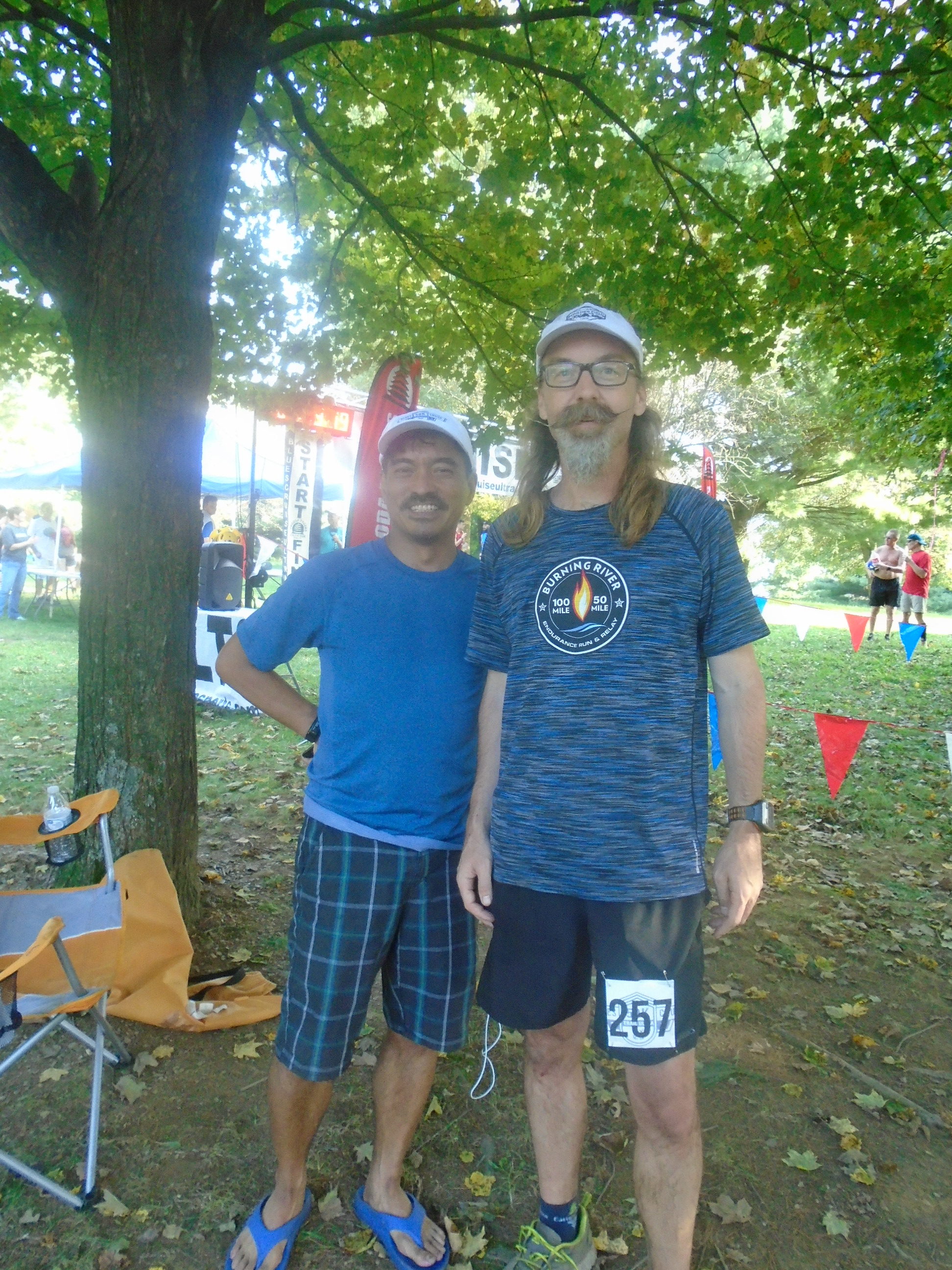 What’s better than one Phil P.? Why two, of course.